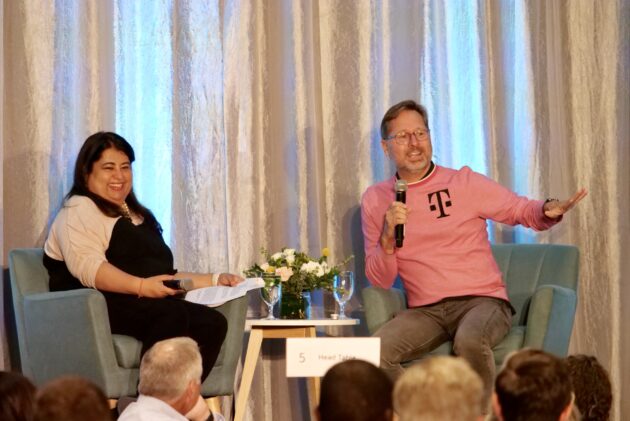 T-Mobile CEO Mike Sievert was a featured speaker at a luncheon Thursday hosted by the Seattle Metropolitan Chamber of Commerce. Sievert joined Bellevue, Wash.-based T-Mobile in 2012 and became CEO in 2020, just after T-Mobile merged with Sprint. Here’s a rundown of his comments.

“It’s maybe one of the biggest pain points we’ve ever set out to try and tackle: dead zones,” said Sievert, who announced the deal last month with SpaceX CEO Elon Musk at SpaceX’s Starbase facility in South Texas.

The partnership calls for creating a new network, composed of Starlink satellites that can use T-Mobile’s mid-band spectrum nationwide. The beta version of Starlink’s broadband boost won’t start rolling out in select areas until next year, after a series of SpaceX satellite launches. That rollout will begin with text messaging, including SMS, MMS and messaging apps. Voice and data coverage will come later.

“We don’t know exactly how fast it will come together. But our dream is that your existing smartphone, the one you already have, with no new technology required, will be able to connect to Starlink satellites orbiting the Earth and you’ll be able to have real-time messaging, emergency messaging, picture messaging, real-time communication not only via text, but popular messaging apps,” Sievert said Thursday. “If everything goes to plan we should be in full beta by the end of next year.”

GeekWire approached Sievert after his on-stage interview and asked follow-up questions related to the SpaceX deal but he declined to answer.

On the Seattle …read more