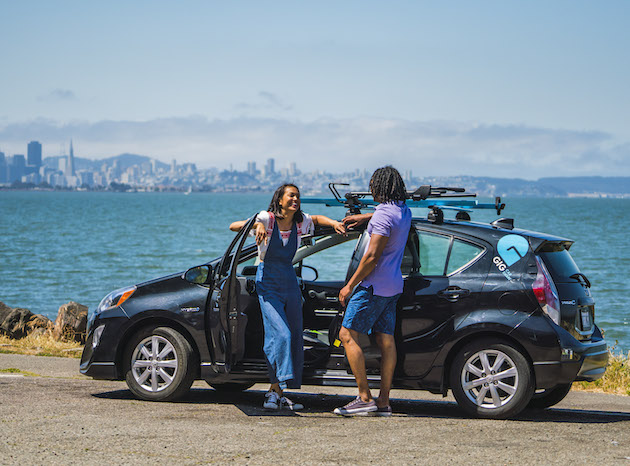 GIG Car Share is hitting the streets of Seattle.

The new free-floating car-sharing service from AAA, which announced in February that it was expanding to the city, is officially available with 250 Toyota Priuses. The move represents a return to a mobility concept in Seattle which once saw hundreds of rentable vehicles from services such as car2go, ReachNow and LimePod.

GIG — as in, get in and go — customers will be able to locate a vehicle, unlock it using a smartphone, drive it and drop it off anywhere within the designated 13-square-mile Seattle “home zone.”

Initial pricing is 40 cents per minute, $15 per hour, $55 for eight hours and $85 per day, according to AAA Washington. For a limited time, the company is waiving a $1 access fee on all trips and a $5 airport parking fee. AAA members save an additional 10 percent on every GIG trip.

Click to enlarge: The GIG Car Sharing “home zone” in Seattle where vehicles can be picked up, driven and parked. (GIG Image)

GIG Car Share is also launching Gig4Good, an effort to support community organizations through free driving credits that could help enable such efforts as food delivery. In Seattle, Gig4Good will provide nearly $200,000 in driving value, or 13,000 driving hours — to nonprofit partners in June. Initial partners include Lifelong, an organization that stands up for communities facing discrimination and marginalization, and Open Arms Perinatal Services, which provides community-based support during pregnancy, birth, and early parenting.