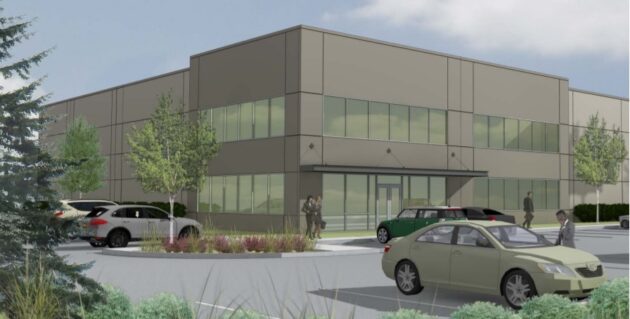 An artist’s conception shows one of the buildings currently under construction at Redmond Ridge Business Park. (Illustration via Kidder Mathews)

SpaceX is leasing a 124,907-square-foot building complex that’s under construction in Redmond Ridge Business Park, east of Seattle, according to the latest industrial real estate market report from Kidder Mathews.

Kidder Mathews, which listed the property for lease, says construction is slated for completion this fall.

The construction site, which takes in the business park’s Buildings 4 and 5 and offers up to 300 extra parking places nearby, is just a block away from SpaceX’s existing facilities at Redmond Ridge. Those facilities serve as the headquarters for SpaceX’s Starlink satellite development and manufacturing operation.

Eventually, SpaceX aims to provide global broadband internet access via a network of thousands of Starlink satellites in low Earth orbit. More than 1,200 satellites already have been launched, and Starlink has been gradually expanding its “Better Than Nothing” beta offering.

During this week’s Satellite 2021 LEO Digital Forum, SpaceX President Gwynne Shotwell said there’s no set time frame for moving beyond the beta phase and added that the company still has “a lot of work to do to make the network reliable.”

The new lease arrangement appears to signal a significant expansion of SpaceX’s Redmond footprint. We’ve reached out to SpaceX and will update this report with anything we hear back.

Kidder Mathews’ pamphlet about the property, just off Northeast Novelty Hill Road, suggests that office and/or manufacturing facilities can be built to suit the tenant. Building 4 would take in 57,207 square feet, while Building 5 would add 67,700 square feet.

SpaceX has been occupying at least three other buildings at Redmond Ridge Business Park, and that’s not the only satellite development center in Redmond: The 219,000-square-foot headquarters for Amazon’s Project Kuiper, which has its …read more