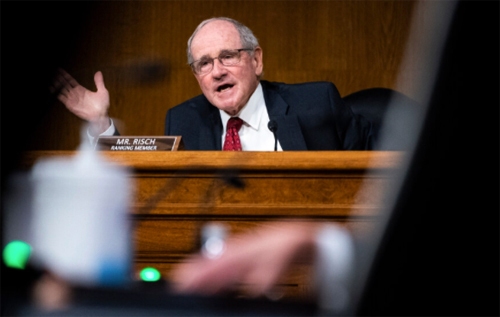 (CNN) — Sen. Jim Risch had a pressing question he needed to ask Secretary of State Antony Blinken during the latter’s testimony Tuesday on Capitol Hill: Who controls the mute button on Joe Biden?

That may sound like a joke, but Risch wasn’t joking.

The Republican from Idaho started his questioning of Blinken, who was on the Hill to discuss the deadly serious business of the controversial withdrawal of U.S. troops from Afghanistan, this way: “Somebody in the White House has authority to press the button and cut off the president’s speaking ability and sound. Who is that person?”

Blinken responded that Biden “speaks very clearly and very deliberately for himself.”

Risch would not be dissuaded. “Are you saying there is no one in the White House who can cut him off? Because yesterday that happened, and it’s happened a number of times before that. It’s been widely reported that somebody has the ability to push the button and cut off his sound and stop him from speaking. Who is that person?”

Blinken responded, “There is no such person.”

Risch continued: “Are you unaware that this is actually happening? It was widely reported, and it’s not the first time it’s happened. Are you telling this committee that there’s no one in the White House who pushes the button and cuts him off in mid-sentence?”

Here’s what was going on:

This “mute button” idea pushed by Risch appears to originate from a clip tweeted by the Republican National Committee on Monday that shows Biden begin speaking at an event and then the White House feed cutting off.

BIDEN: “Can I ask you a question?”

The suggestion from the RNC — and Risch — is clear: Someone in the White House  ended …read more