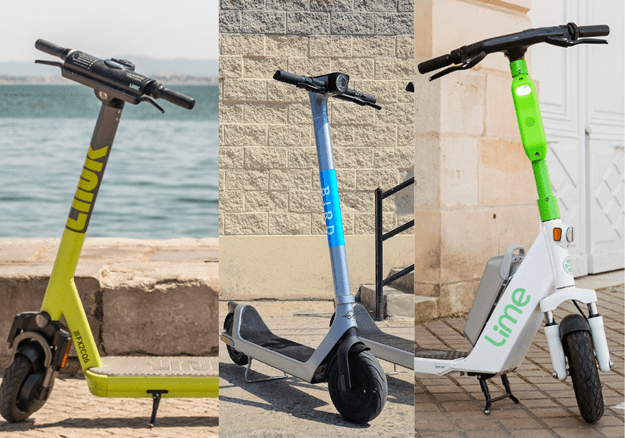 The three scooter brands that will be available in Seattle, from left: Link, Bird, and Lime. (Link, Bird and Lime Photos via SDOT)

The pilot phase of Seattle’s scooter share program has reached the end of the road and three companies have been selected to continue putting their micromobility devices on city streets, the Seattle Department of Transportation announced Thursday.

After a review process, operation permits for 2022-23 have been issued to Link (by Superpedestrian), Lime and Bird. The companies will be allowed to deploy up to 2,000 electric scooters each.

Bird is a new entry in the mix. The company operates in more than 400 cities and according to SDOT, will be bringing their newest third generation of scooters to Seattle, which “offer a safer ride and longer battery life than earlier models.”

Bird scooters will be a new entry in the mix of scooter options on Seattle streets. (Bird Photo)

Link and Lime already operated during the pilot phase, which saw increased adoption of the transportation option. According to a recent report, 260,000 riders took over 1.4 million scooter trips from October 2020 through September 2021.

Wheels and Spin also operated during the pilot, but did not make the cut for the new permits. SDOT said the two companies will have a few weeks to wind down their operations and transfer their fleets to other cities.