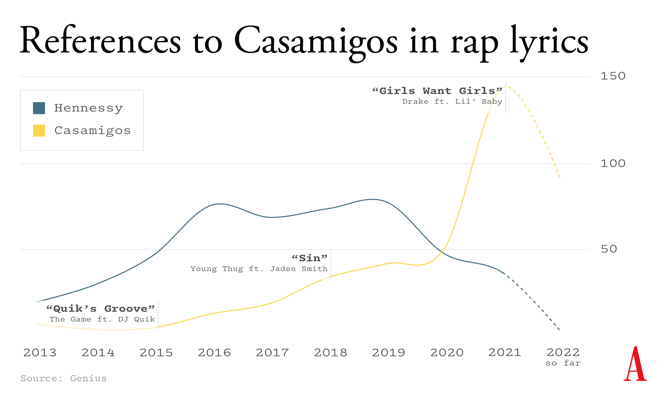 In the beginning, there was Hennessy. “The Genesis,” the first track on Nas’s 1994 debut studio album, Illmatic, packs in four mentions of the cognac brand. “Take this Hennessy,” Nas says. “Pass that henrock, pass that henrock,” says Nas’s younger brother, Jungle. “We drinkin’ this straight up with no chaser,” replies the rapper AZ.

In the decades that followed, Hennessy became a fixture of rap lyrics. 2pac’s 1996 hit “How Do U Want It” called Hennessy “a favorite of my homies when we floss on our enemies.” In the 1998 song “Weed and Hennesey,” Master P rapped: “I smoke weed, and Hennesey / Just to make it through the days man.” Six years later, the references were still everywhere; in 2004, Trick Daddy boasted “See I know how to control my Hennessy” on his Thug Matrimony track “Gangsta Livin’.” Cristal champagne and Patrón tequila soon became rap staples, too, popularized by songs such as Jay-Z’s “Can’t Knock the Hustle,” from 1996’s Reasonable Doubt: “Waddle off the champagne, Cristals by the bottle.” In the 2006 earworm “Snap Yo Fingers,” Lil Jon rapped about mixing Patrón with Percocet:  “I pop, I drank / I’m on Patrón and Perc, I can’t thank.” As rap evolved from its homegrown roots into something glossier and more commercial, the liquor name-drops evolved, too, into a kind of lyrical shorthand for opulent, larger-than-life success and its pitfalls.

But in recent years, I’ve noticed that, seemingly out of nowhere, a different liquor brand is everywhere. Turn on any hip-hop or Top 40 radio station and you’ll hear it too: Casamigos this, Casamigos that. Everyone seems to be obsessed with Casamigos. The Atlanta rapper Lil Baby name-checks the tequila on both Nicki Minaj’s “Do We Have a Problem?” (“She a lil demon off that Casamigos”) and Drake’s “Girls Want Girls” …read more